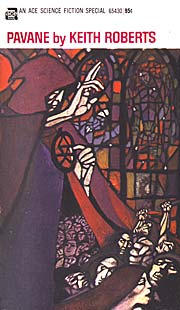 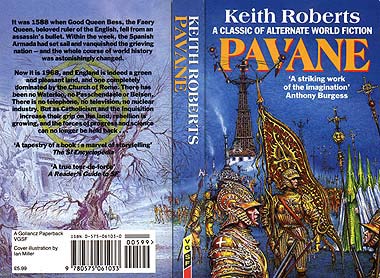 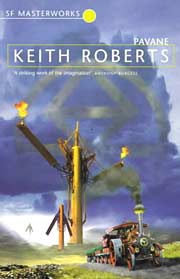 Roberts, Keith. "The Signaller"
Divergence: 1588 CE
Summary: A farmboy attains a position in the Guild of Signallers, attends the guild school, and is assigned to his first posts. But much is demanded of the heroic signallers, and this guildsman is given a winter posting to an isolated Class D semaphore tower.
Series note: Second story in Pavane.
Published: In Impulse, March 1966; Pavane, q.v.; Another World: A Science Fiction Anthology (ed. Gardner Dozois), Follett 1977 (0695806955); and The Best of British SF 2 (ed. Mike Ashley), Futura 1977 (0860079139).

Roberts, Keith. "Brother John"
Divergence: 1588 CE
Summary: In 1985, a priest with an artistic bent is assigned to chronicle the activities of the Office of Spiritual Welfare — the Inquisition. Driven nearly insane he flees the church, and his teachings lead to uprisings against Rome throughout Britain.
Series note: Fourth story in Pavane.
Published: In Impulse, May 1966; and Pavane, q.v.

Roberts, Keith. "Lords and Ladies"
Divergence: 1588 CE
Summary: A young woman reflects on her uncle's drive to dominate the hauliage business in the southwest of Britain, and on how she became involved with the heir to the demesne of Corfe Gate.
Series note: Fifth story in Pavane.
Published: In Impulse, June 1966; and Pavane, q.v.

Roberts, Keith. "Corfe Gate"
Divergence: 1588 CE
Summary: Realizing it would cause starvation in her own lands, the Lady Eleanor of Corfe Gate refuses to pay a church tax to alleviate famine in France, thereby provoking the War of the Castles, a general British revolt against Roman rule.
Series note: Sixth story in Pavane.
Published: In Impulse, July 1966; and Pavane, q.v.

Roberts, Keith. "Coda"
Divergence: 1588 CE
Summary: An epilog which reveals that although the events of "Corfe Gate" did not all turn out well, the War of the Castles eventually led to the loss of Roman control over Britain and the Americas.
Series note: Seventh story in Pavane.
Published: In Pavane, q.v.