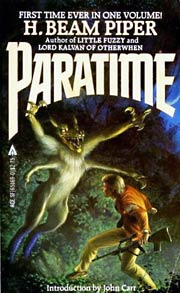 Piper, H. Beam, and John F. Carr. Paratime
Summary: Tales involving Verkan Vall and the Paratime Police, some more explicitly than others. Allohistorical content is weak except in "He Walked around the Horses" and Lord Kalvan of Otherwhen. The infinite parallel Earths of Paratime are classed in five "levels" dependent on the success of the purported colonization of Earth by humanity (which arose on Mars) approximately 75 thousand years ago. Our timeline is classed as Fourth Level since colonization barely succeeded but all memory of it has been lost. The Paratime Police arose in the First Level, in which colonization was highly successful.
Series note: A series of related stories by Piper collected in Paratime! or assembled into Lord Kalvan of Otherwhen, plus later novels and additional stories by Carr. The contents of the two books by Piper have been collected in the omnibus volume The Complete Paratime. Works by Carr include a novel expansion of the short story "Time Crime" (as by Piper and John F. Carr), the novel Paratime Trouble, and stories in the collection The Paratime Police Chronicles. Carr and collaborators have also written and published an extensive series of novel-length sequels to Lord Kalvan of Otherwhen. 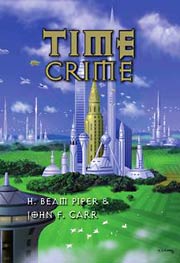 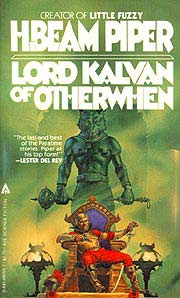 Piper, H. Beam. The Complete Paratime
Summary: Omnibus volume including all of the stories from Paratime! and the novel Lord Kalvan of Otherwhen.
Series note: A Paratime collection.
Published: Ace 2001 (0441008011BUY).