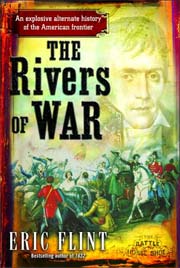 Flint, Eric. Trail of Glory
Series note: Series including The Rivers of War and 1824: The Arkansas War. Two additional volumes were contracted but apparently never published.
Comments: Although the series was once announced as Trail of Glory, it seems to have become better known as the River of War Series.

Flint, Eric. The Rivers of War [vt 1812: The Rivers of War]
Divergence: 1814 CE
What if: Sam Houston's wound at the Battle of Horseshoe Bend was minor and he was able to participate in further action that year.
Summary: Houston and an Irish-American sergeant participate in four battles in the last year of the War of 1812, including the defence of the Capitol, and become involved with plans to initiate migration of the Cherokee and other Indian tribes west of the Mississippi.
Series note: First volume of Trail of Glory.
Published: As The Rivers of War, Ballantine/Del Rey 2005 (0345465679BUY).
Published: As 1812: The Rivers of War, Ballantine/Del Rey 2006 (0345465687BUY), Baen 2022 (198219197XBUY).