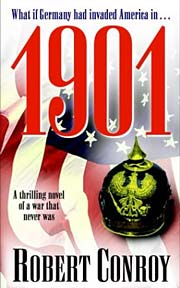 Conroy, Robert. 1901
Divergence: 1901 CE
What if: After the United States refused to sell or transfer any of its new colonial possessions gained from Spain, Kaiser Wilhelm decided to go to war.
Summary: Germany mounts an invasion of the New York City with the objective of forcing the U.S. to surrender its colonies. But despite its inferior army the U.S. fights back, playing a waiting game until the invaders are forced out of their salient.
Published: Presidio 1995 (0891415378BUY); SFBC 1995; Countrysport 2003 (0891418431BUY).