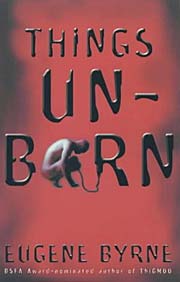 Byrne, Eugene. Things Unborn
Divergence: 1962 CE
What if: Following a nuclear war in 1962, people who lived shortened lives in centuries past began to return from the grave, somehow resurrected by concentrations of radiation.
Summary: In 2008, a plot is afoot in London to topple the returned King Richard III and the religiously tolerant British government, in favor of a puritanical Protestant regime.
Published: Simon & Schuster UK/Earthlight 2001 (0743409116).