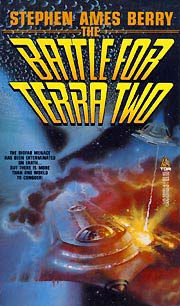 Berry, Stephen Ames. Terra Two Sequence
Divergence: 1939 CE
What if: The US never developed the bomb, Nazi Germany did and Hitler was assassinated in July 1944.
Series note: Four-volume series composed of The Biofab War, The Battle for Terra Two, The A.I. War, and The Final Assault. The first volume is, however, not allohistorical.