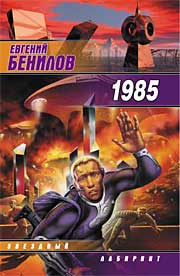 Benilov, Evgeni. 1985
Divergence: 1985 CE
What if: Grigori Romanov, rather than Mikhail Gorbachev, was elected General Secretary of the Communist Party following the death of Konstantin Chernenko and then was succeeded by his son and then grandson.
Summary: Thriller set several decades later in an Orwell-esque future in which the totalitarian Russian-dominated Eurasian Union is at war against the United States of Oceania and the East Asian People's Republic. A young scientist becomes involved with dissidents and organized criminals while evading the "Committee for Political Hygiene".
Published: ACT 2003.
Original in: Russian.
Web link: Evgeni Benilov's homepage