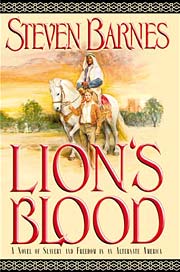 Barnes, Steven. Insh'Allah
Divergence: 400 BCE
What if: Socrates refused to commit suicide and instead fled Athens for Egypt. Two centuries later, Egypt and Carthage united to destroy Rome, and in time the Egyptian-Abyssinian empire came to dominate Africa and Europe.
Series note: A two-volume series including Lion's Blood and Zulu Heart.

Barnes, Steven. Lion's Blood
Divergence: 400 BCE
Summary: More than 2000 years after Socrates, an Irish boy is sold into slavery on a plantation in New Djibouti, near the Aztec border in Bilalistan. Although he nominally becomes a friend of the owner's son, there is always something to remind him that he is no more than property.
Series note: First volume of Insh'Allah.
Published: Warner 2002 (0446526681BUY), 2003 (0446612219BUY). 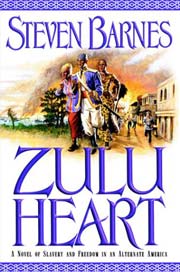